Statistical indicators for each of the 17 SDGs have been prepared to show “where we are”, followed by indicators that show “what we are doing” and the departments or other government bodies that are leading the activities in question. The report shows that São Paulo State is on the right track as far as some of the indicators are concerned. For example, child mortality is sharply down (SGD 3, Good health and well-being), and preschool has improved in quality (SDG 4, Quality education). With regard to Affordable and clean energy (SDG 7), 76.8% of the energy consumed by São Paulo State is renewable, and this is already better than the target set for 2030. In the environmental area (SDGs 14 and 15), progress has been achieved in expanding forest cover and protecting the marine environment. In the social area (SDG 16), crime rates have fallen substantially.

However, some indicators have not improved, including the proportion of people living in poverty (SDG 1). Others, such as the unemployment rate resulting from the severe economic crisis in Brazil, have deteriorated.

The significance of this report includes its identification of the indicators that realistically portray our progress to date and highlight the areas in which we must improve. It will be a useful guide to help departments and other state government bodies organize their statistical surveys in compatibility with the SDGs. Hence the importance of the state’s Committee on the SDGs from now on 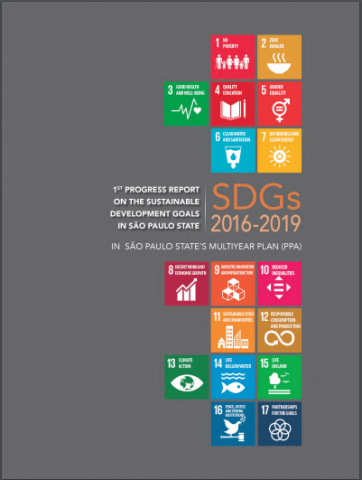 17. Partnership for the goals